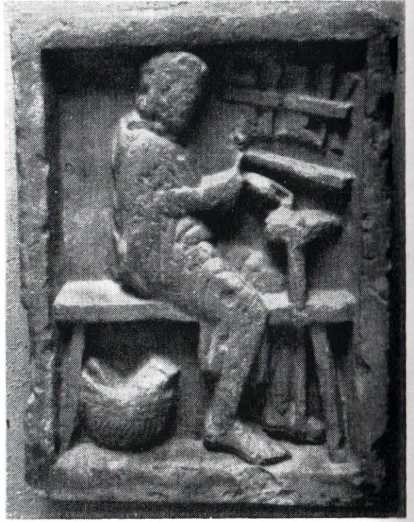 Goodman identifies the relief as a cobbler making a wooden last sitting astride a small bench (‘horse’). The workpiece is held firmly on a sort of anvil by means of a strap passing down through the bench top, and held taut with his left foot. (Photo: Goodman 1964, p. 184, Museo di Civilta Romana, E.U.R., Rome. Reproduced without premission citing fair use)

I wrote about the shaving horse in a previous post (in Norwegian) regretting the lack of evidence for its use before the 15th century.

However, further search led to a thread on Tempus Vivit’s forum mentioning a shaving horse on a roman grave relief from Reims. When also St. Thomas Guild mentioned a roman shaving horse in Goodman’s The history of woodworking tools from 1964, I seemed to be onto something.

Most likely the St. Thomas Guild was referring to the text and image of a roman relief on page 184. While the image’s cutline links the relief to Museo di Civilta Romana, Rome, elsewhere it is said to be in the Archaeological Museum at Reims. I’m not sure about the relation between the two locations, but maybe a copy is in play? Either way Goodman seem to be referring to the same relief as the forum post.

What was in Goodman’s book was not as conclusive as anticipated. There is no attempt to identify a shaving horse. Rather Goodman identifies a ‘horse’ holding som sort of anvil with the workpiece held stout by means of a strap passing down through the bench top and around the worker’s left foot. While I’m not sure I agree with Goodman that we are shown the process of making the last (to mee it looks like the cobbler is working on a shoe clamped to the last by the said strap) it is a bit of a stretch to try to identify this with a shaving horse: In my view this cannot be considered proof that any version of the shaving horse is of roman origin.